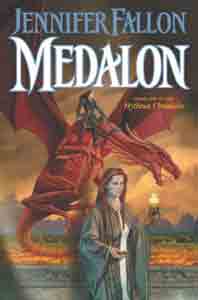 According to legend, the last king of the Harshini sired a half-human child, known as the Demon Child, born to destroy a god . . .

The Sisterhood of the Blade rules Medalon with an iron fist-within the gauntlet of the Defenders, elite warriors sworn to uphold the sisters and keep Medalon free of heathen influence.

R'shiel, daughter of the First Sister of the Blade, has pulled against the short leash of her mother ever since she was a child. Her half-brother, Tarja, is the dutiful son who serves as a Captain in the Defenders. But when they run afoul of their mother's machinations, they must flee for their lives. They soon find themselves caught up in the rebellion against the Sisterhood, though they revile their fellow conspirators heathen belief in the Harshini--a fabled race of magical beings thought long extinct.

But then Tarja & R'shiel encounter Brak, an Harshini outcast, who forces them to face the most shocking fact of all: R'shiel just may be the Demon Child, brought into this world to destroy an evil god.

Medalon starts with a bang and just keeps on going with very few places to take a breath. -- Karey Herriman, SFRevu

Like a tranquil woodland pond in the heat of summer, once readers are immersed in the magical realm of Medalon they will find it extremely difficult to leave. -- Paul Goat Allen, Barnes And Noble

Though its plot has its awkward moments, I enjoyed Medalon, which takes mother/daughter conflict to a whole new level. -- Hilary Williamson, Bookloons

This is a good, solid start to what will no doubt be an epic Series. -- Jen Talley Exum, RomanticTimes Book Club