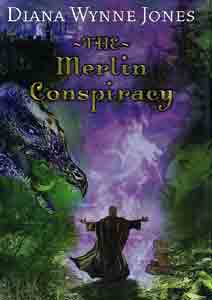 Synopsis of The Merlin Conspiracy

The islands of Blest keep the balance of magic in half the multiverse. If something goes wrong with the magic on Blest, it will have a ripple effect on many other worlds. Something is about to go wrong...

It all begins when the Merlin of Blest dies of a heart attack. Or was he murdered by sorcery?

Two friends, Roddy and Grundo, suspect a conspiracy, but no adult will believe them. When a boy from another world, Nick, blunders into the trouble on Blest, Roddy tries to enlist his help. But what can three children who are just discovering their magical talents do against the new Merlin, the Earthmistress, and the dark powers they...re calling up? The dangers are great, and if Roddy, Grundo, and Nick fail to stop the conspirators before they disrupt the balance of magic, the results will be far more far-reaching and destructive than they can imagine.

Diana Wynne Jones masterfully weaves mystery, intrigue, and, most of all, magic into a complex plot that's full of twists and surprises. In this astonishing novel, the characters' actions have unexpected consequences, and nothing in the multiverse is as it first seems ...

Reviews of The Merlin Conspiracy

Strong magic, convoluted plot, and plenty of it! If you enjoy a longer Book, like the later Harry Potters, I think you'll love this one. -- Reading Matters

In short, Diana Wynne Jones has delivered a thumping-good adventure yarn with dozens of twists and turns. -- Alice K. Turner, The Washington Post

The characterisation is first-rate, the ideas are fabulous. -- Helen Dunmore, The Telegraph

Jones' latest, however, is well worth the effort, and the climactic showdown should satisfy any reader who has given "The Merlin Conspiracy" its full chance to work its considerable literary magic. -- Michael Berry, The San Francisco Chronicle

Young readers still riding a Harry Potter buzz should be able to segue into "The Merlin Conspiracy" without missing a beat. -- Dan Bogey, The Pittsburgh Tribune-Review