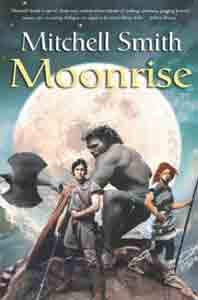 Synopsis of Moonrise : Book Three of the Snowfall Trilogy

Several hundred years after a change in the orbit of Jupiter sent the Earth into a new Ice Age, remnants of civilization battle over territory and technology. A generation has passed since Sam Monroe defeated the Great Khan, became King of Middle Kingdom, and ushered in an era of peace and prosperity, a time when Middle Kingdom grew even more powerful, driven by trade and emerging technology. In a grand gesture, Sam and Queen Rachel adopted the young son of their former enemy and raised him as a prince, second only to the heir to Middle Kingdom's throne. The accidental drowning deaths of the King and Queen trigger the assassination of the Crown Price. Bajazet, too, is attacked, lest he serve as a rallying point for those who support the royal family. Barely twenty, the once-pampered Bajazet flees for his life.Stumbling through the forest, prey where he once was the hunter and with the usurper King's forces on his heels, Bajazet is rescued by a trio of genetically engineered "Persons": Richard, who is almost more bear than human; Nancy, a cunning little vixen; and Errol, whose very human exterior hides a weasel's cold, cruel heart. Boston, buried under glacial ice, gave them life. Boston's perverted technology, used to conquer and oppress, seems almost like magic to the North Americans who are slowly dragging themselves back up the ladder of civilization. Now the rulers of Boston eye the chaos in Middle Kingdom and find it ripe for conquest.Bajazet's new friends are plotting the frozen city's destruction. The one-time Prince, now a lonely warrior, has one choice---help destroy Boston, or die.

Reviews of Moonrise : Book Three of the Snowfall Trilogy

Fans of futuristic tales will be reminded of the Sterling Lanier's Hiero novels with this wonderful trilogy. -- Harriet Klausner, BooksNBytes