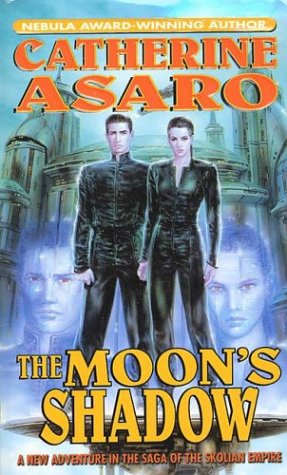 Synopsis of The Moon's Shadow

At the age of seventeen the young nobleman named Jaibriol Qox becomes ruler of a vast galactic empire - and loses everything he has ever valued.

Born of a clandestine liaison between a renegade daughter of the Skolian Imperialate and a scion of the genetically engineered Eubian Traders, Jai Qox grew up in exile, unaware of the powers that coursed through his noble blood.

In the waning days of the bloody Radiance War that ravaged the galaxy, Jai was captured and returned to the Traders to play a role as a puppet Emperor in their scheme to consolidate their domination of space.

Now Jai must walk a razor's edge, to seize the power that is his by birthright without succumbing to its dark seduction and wield it for the good of all, and to avert a conflagration that threatens to engulf a thousand worlds.

About the AuthorOakland, California native Catherine Asaro received a doctorate in physics from Harvard University. She has published a number of papers on theoretical physics and was a physics professor until 1990, when she established Molecudyne Research, which she currently runs. A former ballerina, she has performed with ballets and in musicals on both coasts, and founded the Mainly Jazz Dance program at Harvard. She now teaches at the Caryl Maxwell Classical Ballet. Her husband is John Kendall Cannizzo, an astrophysicist at NASA. They have one daughter and live in Columbia, Maryland.

Reviews of The Moon's Shadow

Asaro's skill at characterization and her ability to weave a complex and suspenseful plot are both on display in The Moon's Shadow. -- Pamela Sargent, Scifi.com

Catherine Asaro has written one of the best works of her star-studded career, one that will have readers searching the shelves for her backlist. -- Harriet Klausner, BooksNBytes