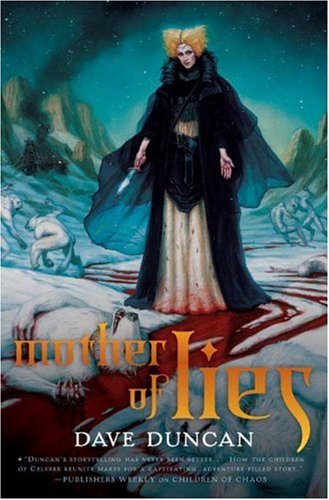 Synopsis of Mother of Lies

The past fifteen years have not been kind to Celebre, the greatest city on the Florengian face of a dodecahedral world. Its walls have been breached and its Doge humiliated by the evil Bloodlord Stralg; all four of its heirs kidnapped and taken over the Edge to Vigaelia; its Dogaressa forcibly impregnated by Stralg and--when her husband's health begins to fail--left to rule over a city teeming with Stralg's troops. And if you think Stralg is bad, wait until you meet his sister Saltaja, a fanatic who sees no human cost as too great to keep the Hrag dynasty in power and her goddess--evil Xaran, the Mother of Lies--appeased.

But there are a few great hopes for the future of the city: the Mutineer, Marno Cavotti, who will not stand to see his hometown destroyed and is massing a powerful liberation movement mere inches beyond Stralg's grasp. And the four heirs of Celebre--each with god-given expertise in their respective fields of artistry, combat, wisdom, or death--are wending their way back over the Edge to their birthplace. Of course, even as Marno and the Celebre children are working towards the common goal of defeating the Hrags, they...re all painfully aware that once that hurdle is crossed only one of them can wind up on the throne.

Continuing the storyline set out in Children of Chaos, Mother of Lies is a fierce, kinetic romp that will keep readers guessing until the last blow is dealt.

Reviews of Mother of Lies

...a lighter fantasy but with a good depth to the plot and characters that keeps it from being a tired re-tread of old formulas. -- Justin, Fanstasy Book Spot