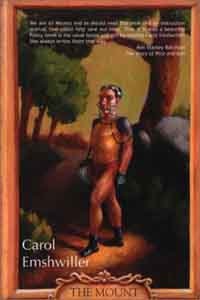 Synopsis of The Mount

Charley is an athlete. He wants to grow up to be the fastest runner in the world, like his father. He wants to be painted crossing the finishing line, in his racing silks, with a medal around his neck.

Charley lives in a stable. He isn't a runner, he's a mount. He belongs to a Hoot: The Hoots are alien invaders. Charley hasn't seen his mother for years, and his father is hiding out in the mountains somewhere, with the other Free Humans. The Hoots own the world, but the humans want it back. Charley knows how to be a good mount, but now he's going to have to learn how to be a human being.

The Mount is the new novel by Carol Emshwiller, Author of Carmen Dog and Ledoyt.

Reviews of The Mount

...there's much going on beneath the surface of this narrative, including oblique flashes of humor and artfully articulated moments of psychological insight. -- Michael Berry, San Francisco Chronicle

Reading The Mount is a challenging, but ultimately rewarding, experience. -- Becky Ohlsen, Bookpage

It is certainly the case that neither new Emshwiller title is anything but merely what it claims to be: an SF novel which plays crystalline riffs on other SF novels... -- John Clute, Scifi.com

I didn't like this Book much, although I certainly admired it. -- Donna McMahon, SF Site

...it takes no risks. -- Jeremy Smith, Infinity Plus