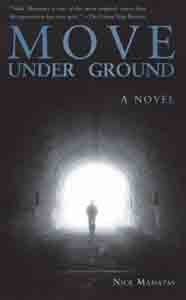 Synopsis of Move Under Ground

The year is nineteen-sixty-something, and after endless millennia of watery sleep, the stars are finally right. Old R...lyeh rises out of the Pacific, ready to cast its damned shadow over the primitive human world.

The first to see its peaks: an alcoholic, paranoid, and frightened Jack Kerouac, who had been drinking off a nervous breakdown up in Big Sur. Now Jack must get back on the road to find Neal Cassady, the holy fool whose rambling letters hint of a world brought to its knees in worship of the Elder God Cthulhu.

Together with pistol-packin... junkie William S. Burroughs, Jack and Neal make their way across the continent to face down the murderous Lovecraftian cult that has spread its darkness to the heart of the American Dream. But is Neal along for the ride to help save the world, or does he want to destroy it just so that he...ll have an ending for his Book?

Reviews of Move Under Ground

If you've read ON THE ROAD or NAKED LUNCH, you'll probably find yourself going back to them again. If not, this is the perfect Book to launch you into those classics of American literature. -- Douglas A. Waltz, CultCuts

This is a fun Book, but don't let that fool you. Just as with Kerouac, there is a story, and then, beneath that, there is a point, and possibly a second story, running under ground. -- David Niall Wilson , Chi Book reviews

Horror fans looking for something different will definintely enjoy this, and fans of the Beats should find more than enough good stuff here for them, as well. -- Adam Lipkin, Bookslut

This novel succeeds on every level; as a character study, as a period piece, as a tense and frightening horror story, and as an adventure story of "the road". -- Gary A. Braunbeck