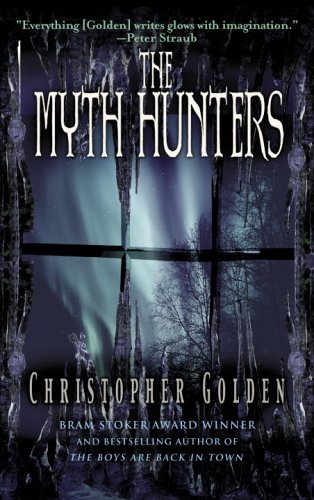 Synopsis of The Myth Hunters

In this enthralling new tale from bestselling Author Christopher Golden, one man is drawn into a realm just across the veil from our own, where every captivating myth and fairy tale is true, the vanished exist...and every fear is founded....

Yielding to his father's wishes, Oliver Bascombe abandoned his dream of being an actor and joined the family law firm. Now he will marry a lovely young woman bearing the Bascombe stamp of approval. But on the eve of his wedding, a blizzard sweeps in...bringing with it an icy legend who calls into question everything Oliver believes about the world and his place in it....

Pursued by a murderous creature who heeds no boundaries, Jack Frost needs Oliver's help to save both himself and his world...an alternate reality slowly being displaced by our own. To help him, Oliver Bascombe, attorney-at-law, will have to become Oliver Bascombe, adventurer, hero...and hunted. So begins a magnificent journey where he straddles two realities...and where, even amid danger, Oliver finds freedom for the very first time.

Reviews of The Myth Hunters

If you...re looking for something that's out of the ordinary on almost every level, but somehow manages to also be compelling and familiar, seek out The Myth Hunters. -- Johnny Butane, The Horror Channel

What's here is highly imaginative, occasionally gruesome and mostly fun, but just be aware it has no end as of yet. -- Rod Lott, Bookgasm