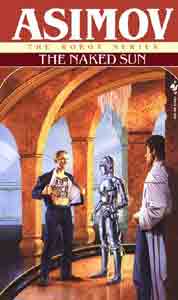 Synopsis of The Naked Sun

The planet Solaria could destroy Earth in two seconds flat...

Solaria was powerful and power-hungry. It had taken over two hundred years to develop the ultimate weapon-a massive army of robots that could obliterate Earth and rule the universe in a matter of days.

But now that would have to wait.

One of Solaria's most eminent scientists had suddenly been found brutally murdered. Only Earth's most famous detective, Elijah Baley, could solve the dark, baffling mystery. Solaria demanded his help.

Baley didn't want to go. But how could he refuse?

Earth's very existence was at stake.

Reviews of The Naked Sun

A classic whose time has passed. -- Christian "naddy" Weisgerber

The Naked Sun is a classic of science fiction and well worth reading by mystery fans who also enjoy that genre. -- Amit K. Basu, MysteryGuide.com

Unfortunately, this Book has one great big hole in it... -- Steve, AllReaders.com