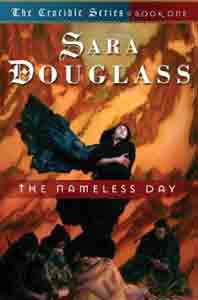 Synopsis of The Nameless Day

The Black Plague. The Pestilence. Disease and death haunt every town and village across 14th century Europe and none are immune from its evil. Some see the devastation of their world as a sign from God for Man's wickedness.

But Brother Thomas Neville sees this swath of death as something much more. Neville is a man beset by demons. Or is it angels? He has had a visitation from none other than the Archangel Michael, who commands Thomas to a mission. This mission will take Neville across the length and breath of the continent in a desperate bid to find the means to stop the minions of Satan who have found a doorway out of Hell and are preparing to venture forth, to try and seize this world in preparation for an assault on Heaven itself.

As Thomas Neville encounters angels and demons, saints and witches, he comes to realize that the armies of God and Satan are arraying themselves for the final battle...and that his soul is to be the battleground.

The question is, has Neville picked the truly good side?

Reviews of The Nameless Day

Despite its overpopulation problem, The Nameless Day is clear and absorbing, and most of its American readers will eagerly await the domestic publication of the sequels. -- Cynthia Ward, Scifi.com

...Douglass does, on occasion, stumble in this opening to her newest trilogy. -- William Thompson, SF Site

THE NAMELESS DAY is a fantastic historical fantasy that takes place on an Earth almost similar to our own in the middle ages. -- Harriet Klausner, BooksNBytes