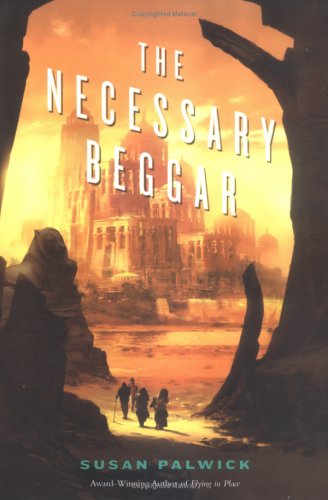 Synopsis of The Necessary Beggar

Praised as "a deeply felt, deeply moving tale . . . chilling and finely tuned" (Publishers Weekly), Susan Palwick's first novel Flying in Place won widespread acclaim for its haunting exploration of a troubled childhood. Now, after a decade, Palwick returns with the powerful tale of a family cast out of an idyllic realm, learning to live in our own troubled world--an exciting and insightful examination of humanity in the spirit of Ursula Le Guin's The Disposessed and Robert Heinlein's Stranger in a Strange Land.

L...mabantunk, the Glorious City, is a place of peace and plenty. But it is also a land of swift and severe justice. Young Darroti has been accused of the murder of a highborn woman who had chosen the life of a Mendicant, a holy beggar whose blessing brings forgiveness. Now his entire family must share his shame, and his punishment--exile to an unknown world.

Grieving for the life they have left behind, Darroti and his family find themselves in a hostile land--an all-too-familiar American future, a country under attack in a world torn by hatred and war. There, each tries to cope in their own way.Some will surrender to despair. Some will strive to preserve the old ways. Some will be lured by the new world's temptations. And some, sustained by extraordinary love, will find a way to heal the family's grief and give them hope.

Reviews of The Necessary Beggar

Stripped of its writing-workshop pulse-release prescription revelations, though, a finer tale does lurk within, and is told. -- John Clute, Scifi.com

Language, characterization and world-building flow together beautifully to tell a heartbreaking and ultimately uplifting story that will appeal to a wide variety of readers. -- Jen Talley Exum, The Romantic Times Book Club