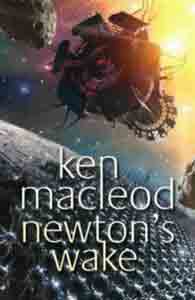 In the aftermath of the Hard Rapture--a cataclysmic war sparked by the explosive evolution of Earth's artificial intelligences into godlike beings--a few remnants of humanity managed to survive. Some even prospered.

Lucinda Carlyle, head of an ambitious clan of galactic entrepreneurs, had carved out a profitable niche for herself and her kin by taking control of the Skein, a chain of interplanetary star-gates left behind by the posthumans. But on a world called Eurydice, a remote planet at the farthest rim of the galaxy, Lucinda stumbled upon a forgotten relic of the past that could threaten her way of life.

The Hard Rapture took Earth's best minds away. Now the rest are about to find out where they went ... Centuries ago, space settlers and soldiers fled to the stars from the sentient AI war machines that engulfed Earth. They colonised Eurydice, a planet whose rocks contain traces of its own war machines - some of which still guard a vast, enigmatic artefact on a remote tundra. When an expedition raids this strange artefact, the Eurydiceans discover that they weren't the last survivors of humanity after all. Their leisured lifestyle is about to be disrupted by new arrivals for whom Eurydice is a prize worth fighting over. And the long-dormant war machines are awakening ... Newton's Wake is a stunning stand-alone space opera, charting the struggle for human survival in a universe dominated by post-human intelligence.

I hate using clich's, but this was a real page-turner for me; I just had to keep reading to see what happened next.rs. -- Joe Gordon, The Alien Online

Newton's Wake is perhaps one of the funniest sf novels I have read in a long time. -- Alex McLintock, Diverse Books

This a great read, full of thought and workings, but also human and entertaining. -- Iain Emsley, SFRevu

Whilst I enjoyed the Book I have to say that it rather seemed to lose its way towards the end. -- Paul Hanley, SFCrowsnest