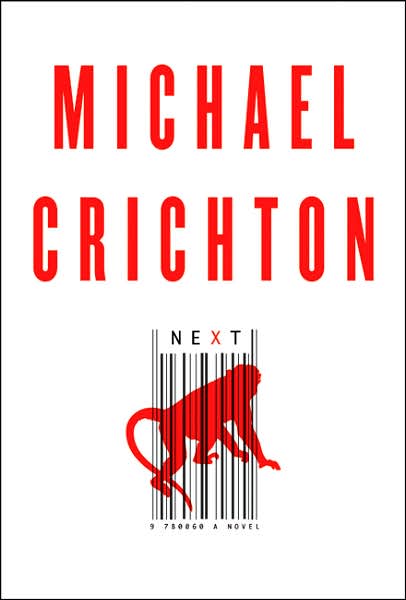 Welcome to our genetic world.

Fast, furious, and out of control.

This is not the world of the future--it's the world right now.

Is a loved one missing some body parts? Are blondes becoming extinct? Is everyone at your dinner table of the same species? Humans and chimpanzees differ in only 400 genes; is that why an adult human being resembles a chimp fetus? And should that worry us? There's a new genetic cure for drug addiction--is it worse than the disease?

We live in a time of momentous scientific leaps; a time when it's possible to sell our eggs and sperm online for thousands of dollars; test our spouses for genetic maladies and even frame someone for a genetic crime.

We live in a time when one fifth of all our genes are owned by someone else, and an unsuspecting person and his family can be pursued cross-country because they happen to have certain valuable genes within their chromosomes. . . .

Devilishly clever, Next blends fact and fiction into a breathless tale of a new world where nothing is what it seems, and a set of new possibilities can open at every turn. Next challenges our sense of reality and notions of morality. Balancing the comic and bizarre with the genuinely frightening and disturbing, Next shatters our assumptions, and reveals shocking new choices where we least expect.

The future is closer than you think. Get used to it.

... this might be dimly eligible for adolescents looking for some kind of action novel featuring genetically altered animals. -- Inchoatus

...maybe the occasional reader will be inspired to do serious follow-up research, but my guess is that the vast majority will just come for the freak show. -- Patrick Anderson, The Washington Post

Though "Next" is informative, it's also a tepid read. -- Edward Nawotka, Seattle Times

...Next is a cautionary tale that's strong on caution and weak on tale. -- Rovert Cremins, Houston Chronicle