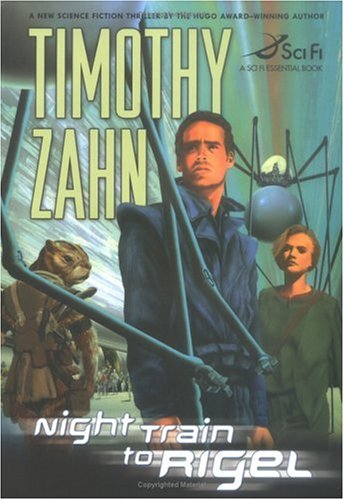 Synopsis of Night Train to Rigel

It all starts when a man comes to deliver a message to Frank Compton--only to fall dead at his feet. What follows is a suspenseful thriller that only Timothy Zahn, a master of hard SF adventure, could have written.

More than two hundred years from now, the Quadrail transportation system run by the enigmatic Spiders connects civilizations throughout the galaxy. But someone is threatening the entire system and the worlds it serves with a military force that could wreak interstellar havoc. Worse yet, a more subtle and sinister threat lurks: the Modhri, whose unique coral is prized throughout the galaxy, but which has properties that may create addiction--or worse. Compton, a sharp investigator, lost his job with Earth's security forces when he exposed a corrupt scheme that had roots in high places. Enlisted by the Spiders to find out who's trying to take over the Quadrail, he's got his hands full, because he's got beings of many races gunning for him to keep him from discovering a far-flung conspiracy that could destroy every civilization in the galaxy.

The result is one of Zahn's most memorable and compelling novels in years.

Reviews of Night Train to Rigel

Zahn decided to hold back a few too many surprises for his big ending for Night Train to Rigel to be a totally satisfying SF novel. -- D. Douglas Fratz, Scifi.com

The Book is pretty enjoyable, though the opening sections do drag a bit. -- Rich Horton, SFSite

Although his tough-guy hero is not always terribly likable, the comic-Book-like nonstop action will attract fans of the genre. -- Jen Talley Exum, The Romantic Times Book Club