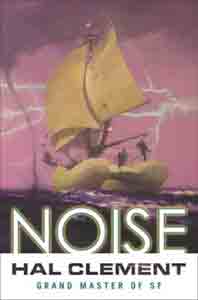 Hal Clement, the dean of hard science fiction, has written a new planetary adventure in the tradition of his classic Mission of Gravity. It is the kind of story that made his reputation as a meticulous designer of otherworldly settings that are utterly convincing because they are constructed from the ground up using established principles of orbital mechanics, geology, chemistry, biology, and other sciences.

Kainui is one of a pair of double planets circling a pair of binary stars. Mike Hoani has come there to study the language of the colonists, to analyze its evolution in the years since settlement. But Kainui is an ocean planet. Although settled by Polynesians, it is anything but a tropical paradise. The ocean is 1,700 miles deep, with no solid ground anywhere. The population is scattered in cities on floating artificial islands with no fixed locations. The atmosphere isn't breathable, and lightning, waterspouts, and tsunamis are constant. Out on the great planetary ocean, self-sufficiency is crucial, and far from any floating city, on a small working-family ship, anything can happen. There are, for instance, pirates. Mike's academic research turns into an exotic nautical adventure unlike anything he could have imagined.

Once you accept the fact that Clement is telling a story (a meticulously scientific story at that) in much the same manner he would had he written the novel fifty years ago, you will find Noise to be a satisfying read and another great contribution to the body of science fiction literature known as hard science fiction. -- Paul Giguere, SFRevu

wish there were some way that I could recommend that readers could learn about the interesting world of Kainui and the culture and biotechnology of its Polynesian inhabitants without having to suffer through even this short novel, which should have been even shorter. -- D. Douglas Fratz, Scifi.com

This Book was surprisingly cool...not surprising when you consider the writer, I suppose, but still, this very basic seeming ocean going adventure was exciting and different. -- Cindy Lynn Speer, Fantastica Daily