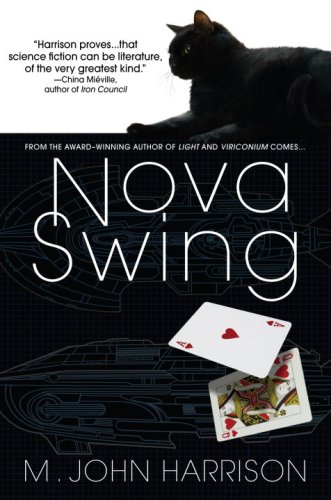 Years after Ed Chianese's fateful trip into the Kefahuchi Tract, the tract has begun to expand and change in ways we never could have predicted...and, even more terrifying, parts of it have actually begun to fall to Earth, transforming the landscapes they encounter.

Not far from Moneytown, in a neighborhood of underground clubs, body-modification chop shops, adolescent contract killers, and sexy streetwalking Monas, you...ll find the Saudade Event Site: a zone of strange geography, twisted physics, and frightening psychic onslaughts...not to mention the black and white cats that come pouring out at irregular intervals.

Vic Serotonin is a 'travel agent... into and out of Saudade. His latest client is a woman who's nearly as unpredictable as the site itself...and maybe just as dangerous. She wants a tour just as a troubling new class of biological artifacts are leaving the site...living algorithms that are transforming the world outside in inexplicable and unsettling ways. Shadowed by a metaphysically inclined detective determined to shut his illegal operation down, Vic must make sense of a universe rapidly veering toward a virulent and viral form of chaos...and a humanity almost lost.

...in many ways Harrison's most human...perhaps most humanistic...novel... -- Abigail Nussbaum, Strange Horizons

The miracle a writer of the fantastic such as Harrison performs is to expand the possibilities of perception. -- John Clute, The Guardian

Not the easiest read in the world, but essential reading. -- David Soyka, SFSite