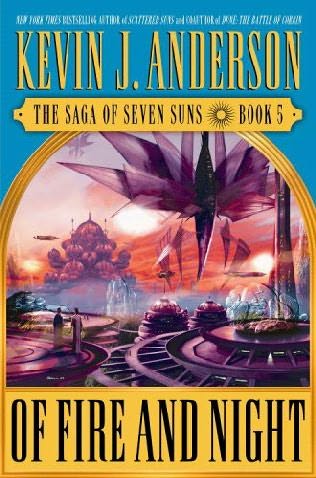 Of Fire and Night

Synopsis of Of Fire and Night

The alien Klikiss robots, pretending to be allies of humanity, have covertly planted an insidious Trojan Horse throughout the Earth Defense Forces. The sudden rebellion of Earths soldier robots leaves millions dead and the Terran Hanseatic League defenseless. In a desperate attempt to save his own race, the Ildiran Mage-Imperator, Jorah, is forced into a devils bargain with the evil hydrogues, requiring him to ambush and destroy what remains of the human race. But the gypsy Roamer clans and the green priests of the worldforest are discovering innovative ways to rebel, and have found strange allies with incomprehensible power. As the climactic battle begins, the Ildiran Solar Navy, the Earth Defense Forces, the Roamers, green priests, Klikiss robots, and hydrogue warglobes collide in a fury that will destroy manyand devastate the landscape of the Spiral Arm forever.

Reviews of Of Fire and Night

Anderson does not deliver a vivid picture of the thousand-and-one mundane touchstones we need to build a mental world. -- Paul Di Filippo , Scifi.com

...one page turner that I found difficult to put down. -- Jo Rogers, Myshelf.com

By maintaining the high standard of writing for which he is known, Kevin J. Anderson continues to thrill and astonish readers with the fifth installment of The Saga of Seven Suns. -- Christina Wantz Fixemer, Wantz Upon A Time

Space opera has never been so much fun. -- Sue Burke, Fresh Fiction