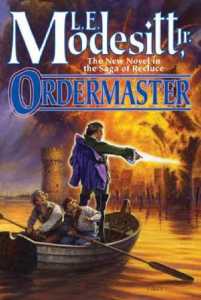 Ordermaster is the 13th Book in the Saga of Recluce and the direct sequel to Wellspring of Chaos. The cooper Kharl has no sooner taken possession of the estate bestowed upon him by Lord Ghrant of Austra for his aid in quelling the revolt of Ghrant's dispossessed brother, when he is summoned back to the capital. Hagen, his friend the lord-chancellor, needs help in dealing with rebellious nobles. After a bloody campaign, in which Kharl discovers and is forced to use even more deadly order magery, civil order is restored and Ghrant's throne firmly secured. But Kharl is now a famous and feared public figure, the Lord's Mage, and his notoriety makes him uncomfortable.To his surprise, Kharl is soon called upon again by Lords Ghrant and Hagen, this time to return to his homeland of Nordla as envoy, because Nordla has become the next target of Hamorian expansion. Back in his hometown of Brysta, he discovers that his old enemy Egen is engaged in a plot with the Hamorians to take the throne from his father and open Nordla to the enemy. Kharl has to find a solution, for the sake of both the land of his birth and his adopted new country.

Ordermaster, while not the strongest entry into the Series, makes a very good companion to the previous Book. -- Cindy Lynn Speer, Fantastica Daily

As in the best works about average people forced to extraordinary measures, Modesitt succeeds in making Kharl a realistic and believable person, not just a magic-wielding hero. -- Jen Talley Exum, The Romantic Times Book Club

There is plenty of action in the Book though not at the expense of character development as L.E. Modesitt, Jr. has written another exciting action adventure in his Recluce Universe. -- Harriet Klausner, Harriet Klausner's Review Archive