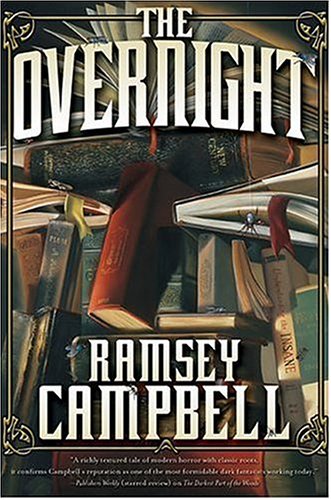 Synopsis of The Overnight

A Bookstore can be a wonderful, welcoming place of both commerce and curiosity. That's the goal for Woody, an American recently transferred to England to run a branch of Texts. He wants a clean, orderly store and lots of sales to show his bosses when they arrive from the States for a pre-Christmas inspection. Not easy given the shop's location in a foggy strip mall.And things keep going wrong. No matter how often the shelves are put in order before the doors are locked at night, when the staff returns in the morning, Books are lying all over the floor, many damp and damaged beyond repair. The store's computers keep acting up-errors appear in brochures and ads and orders disappear completely. And even when the machines are turned off, they seem to glow with a spectral gray light.

The hit-and-run death of an employee in the store's parking lot marks a turning point. One employee accuses another of making sexual advances and they come to blows. Between one sentence and the next, one loses his ability to read. The security monitors display half-seen things crawling between the stacks that vanish before anyone can find them.

The damp, grey, silent things that have been lurking in the basement and hiding in the fog may move slowly, but they are inexorable. This Bookstore is no haven. It is the doorway to a hell unlike any other.

Reviews of The Overnight

...it is a desirable item. -- Pauline Morgan, SFCrowsnest

Nothing, perhaps, is as ripe for "Campbell-izing" as a modern chain Bookstore. Yet The Overnight is frustratingly dread-less. -- Michael Marano, Scifi.com

Fans of Ramsey Campbell and anyone who has worked at a Bookstore will appreciate this tongue in cheek horror tale that grips the audience the moment readers grasp that this is not just another retail establishment. -- Harriet Klausner, Harriet Klausner's Review Archive

To state the obvious, I loved this story. OK, I am a fan of Ramsey Campbell's writing but this aside, The Overnight is a superbly creepy novel. -- Lesley Mazey, The Eternal Night