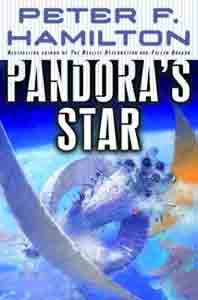 In AD 2329, humanity has colonised over four hundred planets, all of them interlinked by wormholes. With Earth at its centre, the Intersolar Commonwealth now occupies a sphere of space approximately four hundred light years across.

When an astronomer on the outermost world of Gralmond, observes a star 2000 light years distant - and then a neighbouring one - vanish, it is time for the Commonwealth to discover what happened to them. For what if their disappearance indicates some kind of galactic conflict?

Since a conventional wormhole cannot be used to reach these vanished stars, for the first time humans need to build a faster-than-light starship, the Second Chance. But it arrives to find each 'vanished' star encased in a giant force field - and within one of them resides a massive alien civilisation.

This is the type of Book that publicists call "epic" that others might less charitably describe as "bloated." -- David Soyka, Scifi.com

The story built to a thrilling climax with just enough resolution to satisfy but to make me anxious to see where it goes from here when the saga continues. -- Jeffrey J. Lyons, SFRevu

There is no SF writer like Hamilton for marshalling a big plot and a massive cast of characters. -- George Walkley, The Alien Online

I'm looking forward to the next installment of this space opera, but the first Book would have benefited from better pacing. -- BooksForABuck

We're a bit harsh on a rather popular Author but strip away all of the glamour of the name and the marketing and this thing is too long, too bloated, and too redundant. The little pearls of excitement we pry out of this Book are not worth the long, excruciating dives through the numberless and interminable subplots. -- Inchoatus