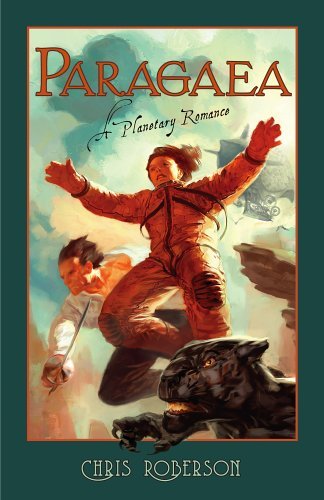 Synopsis of Paragaea: A Planetary Romance

Paragaea: A Planetary Romance is the story of Akilina "Leena" Chirikov, who shortly after launching from Star Town in the Soviet Union, finds herself thrown into another dimension, a world of strange science and ancient mystery. There she meets another time-lost person from Earth, Lieutenant Hieronymus Bonaventure of the Royal Navy...who left home to fight the forces of Napoleon and never returned...and his companion, Balam...outlaw prince of the jaguar men. Bonaventure is interested only in adventure and amusement, while Balam only wants distraction until the day he can reclaim his throne. Having little better to do, they agree to help Chirikov find a way home. In the tradition of the planetary romances of Edgar Rice Burroughs and Leigh Brackett, Paragaea is in fact a "hard" science fiction adventure, grounded in the latest thinking in the fields of theoretical physics, artificial intelligence, genetics, and more. There is a rigorously rational explanation behind all of the unearthly elements, with most of the "magic" the protagonist encounters being the products of a forgotten, transhuman, post-singularity culture that has long since disappeared. Chirikov, a strictly rational Soviet cosmonaut, interprets these as best she can, using the framework of early 1960s science. Being a dutiful Soviet, she wants only to return home to Earth, to inform her superiors about what she has discovered. But she soon finds herself developing ties to her companion Bonaventure that make her wonder whether she really wants to go home at all.

Reviews of Paragaea: A Planetary Romance

How can you turn down a Book with perky cosmonauts, super-science, cat-men, and zeppelins! -- Paul Haggerty, SFRevu

Paragaea is probably a Book for adults who yearn for simpler times, rather than for kids who want to escape the world they know. But it is a competent piece of escapism, and it does manage to sneak in some serious stuff now and then when the reader isn't looking. -- Cheryl Morgan, Emerald City

This was a fabulous Book ... one that I enjoyed from the first word to the last. -- Lesley, The Eternal Night