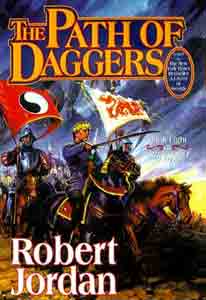 The Path of Daggers

Synopsis of The Path of Daggers

The Seanchan invasion force is in possession of Ebou Dar. Nynaeve, Elayne, and Aviendha head for Caemlyn and Elayne's rightful throne, but on the way they discover an enemy much worse than the Seanchan. In Illian, Rand vows to throw the Seanchan back as he did once before. But signs of madness appearing among the Asha'man lead him to a fateful-perhaps fatal-decision. In Ghealdan, Perrin faces the intrigues of Whitecloaks, Seanchan invaders, the scattered Shaido Aiel, and the Prophet himself. Perrin's beloved wife, Faile, may pay with her life, and Perrin himself may have to destroy his soul to save her. Meanwhile the rebel Aes Sedai under their young Amyrlin, Egwene al'Vere, face an army that intends to keep them away from the White Tower. But Egwene is determined to unseat the usurper Elaida and reunite the Aes Sedai. She does not yet understand the price that others-and she herself-will pay.

1 To Keep the Bargain

11 Questions and an Oath

23 Fog of War, Storm of Battle

Reviews of The Path of Daggers

this particular piece of The Wheel of Time, taken by itself, seems to drag on. -- James Seidman, SF Site

It furthers the story, keeps the fluff to a minimum, and has occasional flashes of what made the Series so good in the first place. -- Sara Lipowitz, Seized by the Tale

I had a vague feeling of dissatisfaction at the end of the story that could not be attributed to the fact that this was an installment of a Series. -- Sara Lipowitz, Seized by the Tale