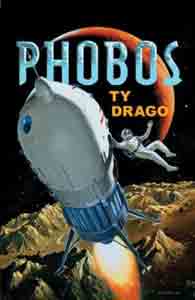 Lt. Mike Brogue is one of a kind: the only native Martian to be a commissioned officer. He's the military's poster boy for relieving political tensions between Mars Colony and Earth---but he wants nothing to do with it. Brogue is just a man trying to do his job as a tactical analyst and prefers to leave the politics to civilians and government subcommittees.After he manages to save a top Terran official from an extremist plot, however, the only way to avoid the spotlight is to get offplanet. So he pulls some strings and gets shipped to one of the small moons of Mars to help unravel a mystery.Some people at the research station on Phobos---Mars's smallest moon---have been killed, and it seems like the culprit is a native life form. The first military team sent in quickly discovered just how lethal the Phobos beast could be. Brogue, however, doesn't focus on the dust clouds and barren rock that compose the beast's lair but rather turns his attention to the high-tech research facility and its crew. He soon learns that there's no such thing as a safe haven from political upheaval.

Unfortunately, Phobos merely plays it safe and dishes out the interlocking answers like someone checking off items on a grocery list. -- Matt Peckham, Scifi.com

PHOBOS is a great police procedural science fiction tale that that hooks the audience from the moment Mike works the mayoral abduction case until he completes the dangerous moon probe. -- Harriet Klausner, BooksNBytes

The few red herrings weren't big enough distraction from working out what was really going on. -- Geoff Willmetts, SF Crowsnest