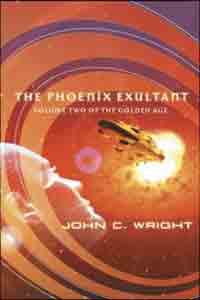 Synopsis of The Phoenix Exultant

And now The Phoenix Exultant, a second epic novel of an heroic quest in a far future world of super-science from an important new talent.

The Phoenix Exultant is a continuation of the story begun in The Golden Age and, like it, a grand space opera in the tradition of Jack Vance and Roger Zelazny (with a touch of Cordwainer Smith-style invention).

At the conclusion of the first Book, Phaethon of Radamanthus House, was left an exile from his life of power and privilege. Now he embarks upon a quest across the transformed solar system--Jupiter is a second sun, Mars and Venus terraformed, humanity immortal--among humans, intelligent machines, and bizarre life-forms, to recover his memory, to regain his place in society and to move that society away from stagnation and toward the stars. And most of all Phaethon's quest is to regain ownership of the magnificent starship, the Phoenix Exultant, the most wonderful ship ever built, and to fly her to the stars.

It is an astounding story of super-science, a thrilling wonder story that recaptures the verve of SF's Golden Age writers The Phoenix Exultant is a suitably grand and stirring fulfillment of the promise shown in The Golden Age and confirms John C. Wright as a major new talent in the field.

Reviews of The Phoenix Exultant

Wright has dared to dream of a future where all the old constraints and ways of living are undone. -- Paul Di Filippo, Scifi.com

Imperfections aside, THE PHOENIX EXULTANT is a fascinating read and worth the occasionally heavy language. -- BooksForABuck

The action sequences, for all their verve, seem like mere interludes between the ethical and epistemological debates. -- Gerald Jonas, The New York Times