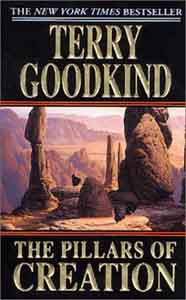 The Pillars of Creation

Synopsis of The Pillars of Creation

Entering the world of New York Times bestselling Author Terry Goodkind, we find ourselves gripped by fear, held spellbound by suspense, and, most of all, aching to be there beside people who capture our hearts.

Now, in Goodkind's latest and most lavish adventure yet, a young woman's struggle for salvation from inner demons and an ancient injustice takes on terrifying dimensions. Tormented her entire life by inhuman voices, Jennsen seeks to end her intolerable agony. She at last discovers a way to silence the voices. For everyone else, the torment is about to begin.

Richard Rahl and his wife, Kahlan, have been re-united after their long separation, but with winter descending and the paralyzing dread of an army of annihilation occupying their homeland, they must venture deep into a strange and desolate land. Their quest turns to terror when they find themselves the helpless prey of a tireless hunter.

Exploited by those intent on domination, Jennsen finds herself drawn into the center of a violent struggle for conquest and revenge. Worse yet, she finds her will seized by dark forces more abhorrent than anything she ever envisioned. Only then does she come to realize that the voices were real.

Staggered by loss and increasingly isolated, Richard and Kahlan desperately struggle to survive. But if they are to live, they must stop the relentless, unearthly threat that comes out of the darkest night of the human soul. To do so, Richard will be called upon to face the demons stalking among the Pillars of Creation.

Enter a world without rival. Discover breathtaking adventure and true nobility of spirit. Find out why millions of readers the world over have elevated Terry Goodkind to the ranks of legend.

Reviews of The Pillars of Creation

Mr. Goodkind has a lot of anger in him, anger which rolls out of his Books. His Books are very readable, but I don't know if I want to meet the man in person. -- Henry Leon Lazarus, Tome Of Lazarus - ScienceFiction.com

Although I was pleased to see the introduction of new characters into the Series, I was disappointed in the ...rushed... ending which is very unusual for a Goodkind Book. -- Gary Reynolds, Wizard's Keep

If you neglected to read the first six Books in this action-filled, continuing saga, you not only missed a lot of great fantasy, you will probably find yourself lost in The Pillars of Creation. -- Patricia Lucas White, Crecent Blues

Those people who have read and enjoyed the previous installments will no doubt also enjoy The Pillars of Creation. -- Rob Kane, SF Site

The seventh Sword of Truth novel, THE PILLARS OF CREATION, is an exciting sword and sorcery tale that sub-genre fans will enjoy though the characters seem more loquacious than active. -- Harriet Klausner, BookBrowser

The Pillars of Creation is a real page-turner. -- Patrick Heffernan, Mysterious Galaxy