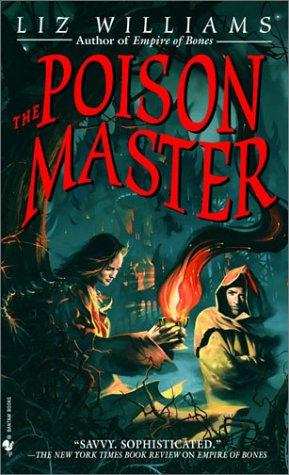 Synopsis of The Poison Master

On the planet of Latent Emanation, humans are the lowest class, at the mercy of their mysterious alien rulers, the Lords of Night. But Alivet Dee, an alchemist, can't help but question the Lords... rule ever since her twin sister was taken to serve in their palace. Alivet saves every penny to pay her sister's unbonding fee, but her plan is destroyed when one of her potions kills a wealthy client--and Alivet finds herself wanted for murder. Her only hope is the darkly attractive man who may have engineered her downfall but who still offers her a last chance of salvation.

A Poison Master from the planet Hathes, Arieth Mahedi Ghairen needs an alchemist of Alivet's expertise to find the one drug that can take down the Lords--and free the universe from their rule. Sequestered in Ghairen's fortress laboratory, lied to by both her new ally and his daughter's enigmatic governess, Alivet doesn't know whom to trust or where to turn for answers. But driven to undo her sister's fate, Alivet races to hone her skills in time--even as time runs out.

Reviews of The Poison Master

Although the way the two story strands are brought together in The Poison Master is slightly unsatisfying, the chances Williams has taken here and her confident handling of a wide range of material promises much for her future novels. -- Gavin J. Grant, BookPage

Liz Williams has created a very innovating, cutting edge science fiction thriller that starts off at supersonic speed and turns into faster than light until the plot attains a satisfying if startling climax. -- Hariett Klausner, Under the Covers

Williams joins A.A. Attanasio and China Mi...ville as one of the best contemporary practitioners of a kind of imaginative literature that fuses the intellect of SF with the heart of fantasy. -- Paul Di Filippo, Scifi.com

The ideas are good, if not always original, but the inventiveness flags and the pace is not quite enough to carry it through. -- Jon Courtenay Grimwood, The Guardian