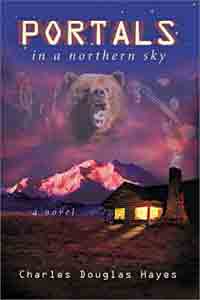 Portals in a Northern Sky

Synopsis of Portals in a Northern Sky

Transport Yourself Through Time and Thought.

This deftly woven story crosses genres from thriller to adventure, science fiction to historical, discussing philosophy and literature all the way. Portals in a Northern Sky is a Book you will want to savour.

The secret team behind Portals System: a new technology that shows the past in real time and that the U.S. president is about to unleash on the world

Bob Thornton: One of Wall Street's hottest whiz kids, who throws away the materialist life and hitchhikes to the Alaska wilderness in the company of Ruben Sanchez, an impassioned skeptic and self-taught philosopher.

Sara Spencer Peek: Crossing the prairies as a teenager in the 1860s, she rises out of unimaginable grief and loss to build a new life for herself...not just once, but several times...and remains a fixture in the lives of her descendants.

Vince Terrell: The tortured inner-city cop who avenges his sister's death...and risks his own...by stealing both the money and the dope in a back-alley drug deal.

Adam Whitehead: The scientist who made Portals possible and who mysteriously disappears just as James Tall Tree, a native Sioux and the president's national science advisor, desperately needs to find him.

If you're a fan of Herman Melville's Moby-Dick... Jack London's Call of the Wild... Robert Pirsig's Zen and the Art of Motorcycle Maintenance... Ayn Rand's Atlas Shrugged... the imaginary worlds of Robert Heinlein, Ray Bradbury, or Isaac Asimov... the gripping thrillers of Michael Crichton, Tom Clancy, or John Grisham... or any Book that raises core questions about the purpose of life, education, or fate, Portals in a Northern Sky is a must-read.

Reviews of Portals in a Northern Sky

I really enjoyed this Book, but it's not for everyone. -- Paul Lappen, Booklore

I know this Book will not fit into the mold expected of some science fiction readers, but I found it to be a thoroughly pleasant read & can recommend it highly. -- David Brown, RebeccasReads.com