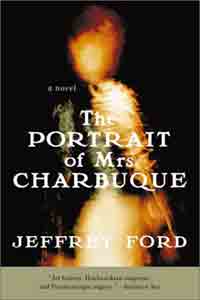 The Portrait of Mrs. Charbuque

Synopsis of The Portrait of Mrs. Charbuque

A fable, a nightmare, a vision, a mystery -- superbly rich imaginative fiction at its best. New York, 1893, and society portrait painter Piero Piambo feels his artistic ambition waning, even while he immortalizes the city's nouveaux riches in oil paints. But then he receives a bizarre and lucrative commission, to paint the mysterious Mrs Charbuque. The catch is that he is not allowed to see her, and so Piambo sits before a screen as his sitter tells him of her life, dreams, and fears -- clues from which he must divine her visage. As he works, a Series of murders plagues the city -- deaths that at first seem accidental. And, as Piambo's masterpiece takes shape, his relationship with Mrs Charbuque grows ever more tangled...while her deranged husband becomes hellbent on some inexplicable vengeance.

Reviews of The Portrait of Mrs. Charbuque

Jeffrey Ford is an ingenious writer who describes settings and details with an eloquent and economical style, quickly creating an intriguing atmosphere and never patronising his readers. -- Jeff Gardiner, The Alien Online

This is a novel that will make the reader consider their own relationship to fiction and art but it also pulls the reader through it at an unrelenting pace as the layers of fictions are built up for us. -- Iain Emsley, SFRevu