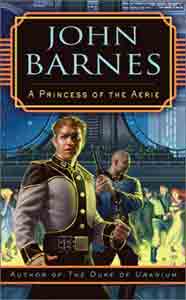 A Princess of the Aerie

Synopsis of A Princess of the Aerie

When Jak gets a message that his ex-girlfriend, Princess Shyf of Greenworld, is in danger, Jak and his panth buddy Dujuv join the Royal Palace Guard and race across the solar system to save her. But upon arrival they quickly discover that they're the ones who need to be rescued...from Shyf! For it seems the once-reluctant Highness has decided that she likes absolute power-and that when they say the royal guards serve at the pleasure of the princess, it's more literal than Jak and Dujuv ever imagined. Now their only way out of the palatial harem is to accept a secret Royal Guard mission that will take them out of the frying pan and into the fire-or, rather, into the middle of an all-out revolution to take over the hellish, lethal mines of Mercury...

Reviews of A Princess of the Aerie

Despite the flat, stereotypical characters, puerile sex scenes, and frequent annoying parenthetical asides, this story is a fun diversion from headier stuff. -- John Patrick Schmitz, The Door To Worlds Imagined

...what it is is a rousing good read, full of excitement and brilliant riffs on genetic engineering, interstellar travel, interspecies interaction and social change. -- Paul Di Filippo, Scifi.com

The plot, such as it is, is totally nonsensical, but the characters do show signs of development and the action and sex are fast and furious. -- Wesley Williamson, Bookloons

...Barnes does a brilliant job satirizing space operas in general as a final send off salute to Star Wars and the numerous clones. -- Harriet Klausner, BooksNBytes

It is spot on for a medium read with some comprehensive descriptions of a lot of space hardware. -- Sue Davies, SF Crowsnest