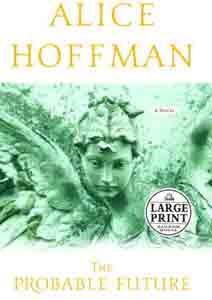 Synopsis of The Probable Future

Alice Hoffman's most magical novel to date?three generations of extraordinary women are driven to unite in crisis and discover the rewards of reconciliation and love.

Women of the Sparrow family have unusual gifts. Elinor can detect falsehood. Her daughter, Jenny, can see people's dreams when they sleep. Granddaughter Stella has a mental window on the future...a future that she might not want to see.

In The Probable Future this vivid and intriguing cast of characters confronts a haunting past...and a very current murder...against the evocative backdrop of small-town New England. By turns chilling and enchanting, The Probable Future chronicles the Sparrows's legacy as young Stella struggles to cope with her disturbing clairvoyance. Her potential to ruin or redeem becomes unbearable when one of her premonitions puts her father in jail, wrongly accused of homicide. Yet this ordeal also leads Stella to the grandmother she was forbidden to meet and to a historic family home full of talismans from her ancestors.

Poignant, arresting, unsettling, The Probable Future showcases the lavish literary gifts that have made Alice Hoffman one of America's most treasured writers.

Reviews of The Probable Future

I'd recommend that you take the time to look through the world with her eyes. -- Iain Emsley, SFRevu

Hoffman's 16th novel feeds a craving. It may not be especially memorable or surprising, but it's delicious while it lasts. -- Janice P. Nimura, The New York Times

Not every writer can skillfully uncover the magical landscape operating within an ordinary one, but Alice Hoffman does exactly that in her new novel, "The Probable Future." -- Christine Thomas, San Francisco Chronicle

...although Hoffman has long imbued life with elements of a fairy tale, as in earlier Books like Practical Magic, the grim realities of the times in which we live make this story particularly seductive. -- Susan Kelly, USA Today

Despite the magic of her story and the drama of the murder, the novel has something distinctly real about it. -- Laura Albritton, The Miami Herald

If readers relax and just let the pretty words flow over them, they can overlook the Book's flaws and get more enjoyment out of it. -- Susan Dunne, The Charlotte Observer

Here Hoffman is at her best, chronicling in meticulous and beautiful detail the ways the three Sparrow women are transformed once their confinement in Unity forces them to be more tolerant...and more forgiving. -- Chris Bohjalian, Book Magazine

Although "The Probable Future" first seems like an attempt to encourage women to embrace the witch within, it soon becomes a solid feminist novel, in every good sense of the word. -- Susan Wickstrom, The Oregonian

Hoffman is an amazingly talented writer with a beautiful sense of sentence construction, an intriguing imagination and the ability to create compelling, complex characters that readers care about. -- Catherine Newton, The Fort Worth Star-Telegram

Hoffman's literary gifts shine their brightest in the scenes of familial discovery and forgiveness, as the three generations of Sparrow women grapple with their past mistakes and uncertain futures. -- Betsy Kline, The Pittsburgh Post-Gazzete

This is Hoffman's 16th novel, and I think a new format is required before she drowns in a quaint and gloopy stew of her own invention. -- Jessamy Calkin, The Telegraph

The action fizzles out - no more corpses, no more truly scary predictions - and the novel veers into family drama. -- Elizabeth A Kennedy, The South Jersey Courier-Post

Filled with the expected twists and turns that such a novel of feminine mystical powers is likely to contain, Miss Hoffman, who has looked before to the supernatural for inspiration, delivers a good summertime read. -- R.C. Scott, The Washington Times

Hoffman's incantatory prose sweeps over the reader like a dream. -- Martha Woodall, The Detroit Free Press