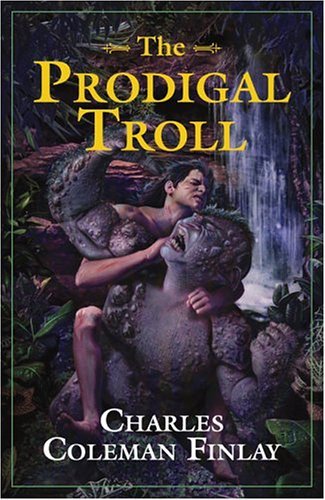 Synopsis of The Prodigal Troll

The Prodigal Troll is a tale of a human child raised by a band of mythological creatures that is both hysterical and moving. When Lord Gruethrist's castle is laid under siege by an invading baron, he sends a trusted knight and nursemaid off with his infant son. Their escape across a wilderness landscape populated by fantastic creatures and torn by war takes unexpected turns until the baby is finally adopted by a mother troll grieving for her own lost child. Christened "Maggot" by a hostile stepfather, the human boy grows up amid the crude but democratic trolls until he leaves the band to rediscover the world of humankind.

But the world of man is a complex and capricious place. Maggot must master its strange ways if he is to survive... let alone win the heart and hand of the Lady Portia.

Finlay's society of trolls are unlike any you've ever read before, and his matriarchal medieval world, pitted as they are against an analog of Native American tribesmen, provides a rich setting for many poignant social and political insights.

Reviews of The Prodigal Troll

Finlay has plainly made a spectacular jump into a new stage of his career, which will hopefully be a long and productive one. -- Paul Di Filippo, Scifi.com

The Prodigal Troll starts off strong but fails to carry the momentum throughout the Book. -- Jeff Wheeler, Deep Magic Book Reviews

I wanted much more and hopefully the sequel will provide. -- Henry Leon Lazarus, philly1.com

I think this novel is a promising start, but that Finlay has to work a bit on the novel writing art. -- Cheryl Morgan, Emerald City