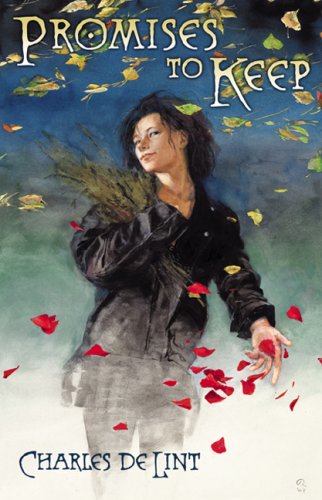 Synopsis of Promises to Keep

After Widdershins, I thought I wouldn't write at length about Jilly again. I'd promised one more short story about her for Bill at Subterranean Press, but that would be it. Having left her in a good place at the end of Widdershins, I didn't want to complicate her life yet again, so I planned to set the story earlier in her life, during her first year as a student at Butler University. Except the story grew. I was having too much fun visiting with this younger Jilly, so I asked Bill if I could expand it to a short novel. He agreed, so now I m busily working away on this as-yet-untitled novella. It takes place in 1972 and begins with Jilly getting a surprise visit from an old friend--her only friend--from her runaway days. Interspersed with the main story that leads off from that meeting are flashbacks to pivotal moments in her life: time spent in the Home for Wayward Girls, her life on the street, meeting and working with the Grasso Street Angel, the first time she meets various familiar faces (Geordie, Sophie, etc.), and chronicles how the messed-up street kid she was grew a social conscience, and became the cheerful character we know from later stories. Although the Book does deal with some serious subjects, the tone isn't all doom and gloom. And while I hope that those of you familiar with these characters will enjoy this visit with their younger selves, I'm also trying to make it a friendly entry into Newford for new readers. Lastly, I'm delighted to say that Mike Dringenberg--an artist I ve wanted to work with for ages--will be doing the cover. - Charles de Lint

Reviews of Promises to Keep

De Lint has the knack of writing so visually that we're pulled into the story and believe in the basic premise before we even realize that we've entered fantastical territory -- perhaps this is why he's so great at urban fantasy. -- Gayle Surrette, SFRevu

Thank you, Charles, for another excursion with Jilly into the fey wonders of the world and the wild places of your imagination. -- Tom Knapp, Rambles.Net

If you are a true fan of the Newford novels and stories, you will definitely want to reserve your copy now as I've no doubt this will indeed sell out fast. -- Cat Eldridge, The Green Man Review