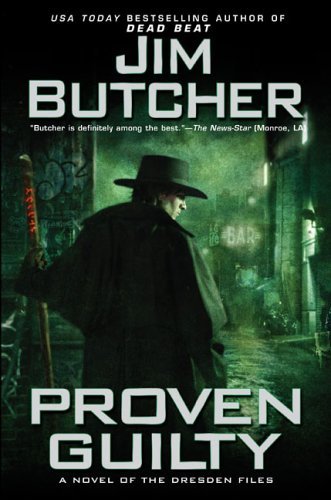 Proven Guilty : A Novel of the Dresden Files

Synopsis of Proven Guilty : A Novel of the Dresden Files

Elevated "into the front rank of urban fantasy heroes" (SF Site), professional wizard Harry Dresden is pledged to fight crime, banish evil, and outwit the masters of dark arts in the shadowy corners of Chicago.

Harry, the only wizard in the Chicago phone Book, is drafted to look into rumors of black magic in the Windy City. And if that wasn't enough, he must help the daughter of an old friend, whose boyfriend was the only one in a room where an old man was attacked. He insists he didn't do it. And what looks like a supernatural assault straight out of a horror film turns out to be-well, something quite close to that, as Harry discovers that malevolent entities that feed on fear are loose in Chicago.

Reviews of Proven Guilty : A Novel of the Dresden Files

If you're a fan of the Series you'll be drawn in and find that this is hard to put down (so start it Friday night and plan a weekend reading marathon). -- Gayle Surrette, SFRevu