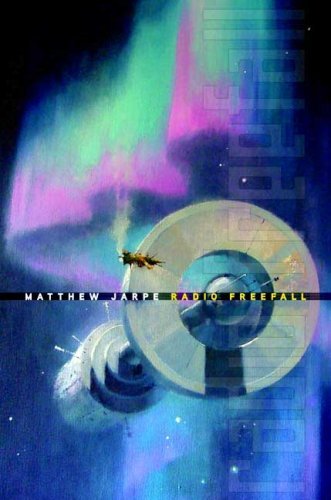 In the tradition of Robert A. Heinlein's The Moon is a Harsh Mistress but with a healthy dose of cyberpunk: Radio Freefall is about a plot to take over the Earth by power-mad, sociopathic computer-geek billionaire, Walter Cheeseman. It's up to a strange cast of rock stars and oddballs to stop him. Aqualung, a mysterious blues musician who also has superhuman tech skills, might be the catalyst for the resistance--or he might just be the pawn of artificial intelligences. To thwart the takeover, the orbitals and the moon colonies secede from Earth. And then something like the Singularity happens, but no one is quite sure. This is a novel of cyberpunk and rock and roll, of technology, artificial intelligence, and wild riffs off of Heinlein all mixed into an explosive debut. Matthew Jarpe launches his SF career with a bang!

...the Author is pretty well bursting with original ideas and has a good feel for what makes characters interesting. -- Ernest Lilley, SFRevu

If you like near future Earth stories, Radio Freefall should be on your reading list. -- JP Frantz, SFSignal

It's the kind of seductive mix that has the potential to spread outside the field like the early works of William Gibson. -- Don D'Ammassa, Critical Mass

The pacing was electric, the plot handled pretty smoothly apart from a few lackluster revelations, and I loved the main characters... -- Robert Thompson, Fantasy Book Critic

The Book clearly brings Matthew Jarpe into the spotlight as a new SF writer to watch. -- D. Douglas Fratz, Scifi.com