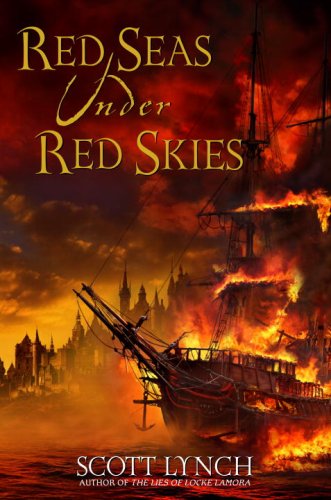 In his highly acclaimed debut, The Lies of Locke Lamora, Scott Lynch took us on an adrenaline-fueled adventure with a band of daring thieves led by con artist extraordinaire Locke Lamora. Now Lynch brings back his outrageous hero for a caper so death-defying, nothing short of a miracle will pull it off.

After a brutal battle with the underworld that nearly destroyed him, Locke and his trusted sidekick, Jean, fled the island city of their birth and landed on the exotic shores of Tal Verrar to nurse their wounds. But even at this westernmost edge of civilization, they can't rest for long...and are soon back to what they do best: stealing from the undeserving rich and pocketing the proceeds for themselves.

This time, however, they have targeted the grandest prize of all: the Sinspire, the most exclusive and heavily guarded gambling house in the world. Its nine floors attract the wealthiest clientele...and to rise to the top, one must impress with good credit, amusing behavior...and excruciatingly impeccable play. For there is one cardinal rule, enforced by Requin, the house's cold-blooded master: it is death to cheat at any game at the Sinspire.

Brazenly undeterred, Locke and Jean have orchestrated an elaborate plan to lie, trick, and swindle their way up the nine floors'straight to Requin's teeming vault. Under the cloak of false identities, they meticulously make their climb...until they are closer to the spoils than ever.

But someone in Tal Verrar has uncovered the duo's secret. Someone from their past who has every intention of making the impudent criminals pay for their sins. Now it will take every ounce of cunning to save their mercenary souls. And even that may not be enough....

...the perfect escape reading for the beach or instead of watching television after a long day of work. -- Sam Lubell, SFRevu

..just as good, if not better than the first Book. -- Robert, Fantasy Book Critic

Like myself, readers should pray to the Crooked Warden that Mr. Lynch soon delivers unto his readers the next installment of the Gentleman Bastards. -- Rob H. Bedford, SFFWorld

...this is a hard Book to put down, and a real pleasure to read. And it's got pirates in it! -- Alice, Sandstorm Reviews

...Red Seas under Red Skies... may not be this years best fantasy novel but I...m sure it will be prominent in any 'top five... list and, true to it's subject matter, will probably pick a few pockets while it's there! -- Graeme's Fantasy Book Review

With his novel hamstrung before he has even begun, Lynch tries the best he can, but he is already into diminishing returns territory. -- Martin Lewis, Strange Horizons