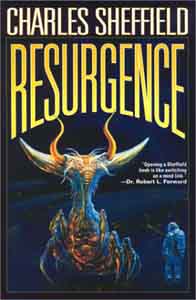 Resurgence: A Novel of the Heritage Universe

Synopsis of Resurgence: A Novel of the Heritage Universe

Hans Rebka, interstellar troubleshooter, thought he had done it all by now--not only helping solve the mystery of the Artifacts which the vanished race of the Builders had left behind millions of years ago, but also preventing the warlike and tyrannical Zardalu from regaining their onetime dominance of the spiral arm. He figured he was entitled to work on problems that only involved one planet at a time. Unfortunately, he is about to find that his earlier exploits were only a warm-up for the main event.

In the Sagittarius Arm of the galaxy, something is destroying whole stellar systems. Only the Builders could have the power to snuff out whole stars and planets. But if the mysterious super-race has returned, why should they bring a wave of cosmic destruction with them? Has a new, malevolent super-race arisen?

Rebka and his old motley crew of humans and aliens go off to investigate. But when they arrive in the beleaguered spiral arm, they become trapped on a planet directly in the path of destruction. And they must escape, for they have learned the secret of the destroyed star systems: a battle is beginning that will determine the ultimate fate of the galaxy

Reviews of Resurgence: A Novel of the Heritage Universe

As for Sheffield's plotting, he weaves his tripartite threads into a suspenseful tapestry, inserting cliffhangers and resolutions at just the right moments. -- Paul Di Filippo, scifi.com