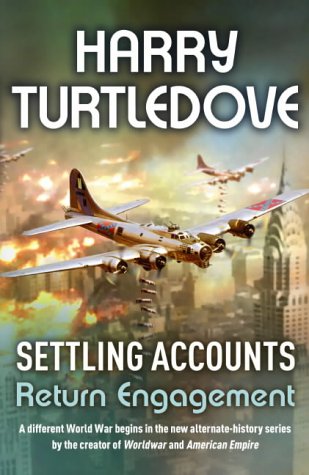 Harry Turtledove's remarkable alternative history novels brilliantly remind us of how fragile the thread of time can be, and offer us a world of ...what if.... Drawing on a magnificent cast of characters that includes soldiers, generals, lovers, spies, and demagogues, Turtledove returns to an epic tale that only he could tell'the story of a North American continent, separated into two bitterly opposed nations, that stands on the verge of exploding once again.

In 1914 they called it The Great War, and few could imagine anything worse. For nearly three decades a peace forged in blood and fatigue has held sway in North America. Now, Japan dominates the Pacific, the Russian Tsar rules Alaska, and England, under Winston Churchill, chafes for a return to its former glory. But behind the fa...ade of world order, America is a bomb waiting to go off. Jake Featherston, the megalomaniacal leader of the Confederate States of America, is just the man to light the fuse.

In the White House in Philadelphia, Socialist President Al Smith is a living symbol of hope for a nation that has been through the fires of war and the flood tides of depression. In the South, Featherston and his ruling Freedom Party have put down a Negro rebellion with a bloody fist and have interned them in concentration camps. Now they are determined to crush their Northern neighbor at any cost.

Featherston's planes attack Philadelphia without warning. The U.S.A. lashes back blindly at Charleston. And a terrible second coming is at hand. When the CSA blitzkrieg is launched, the U.S.A. is caught flat-footed. Before long, the gray Army reaches Lake Erie. But in its wake the war machine is spinning a vortex of destruction, betrayal, and fury that no one, not even Jake Featherston himself, can control.

Now, President Smith faces a Herculean task, while an obscure assistant secretary of war named Roosevelt rises in his ranks. For the U.S.A., the darkest days still lay ahead. Across the globe, a new era of war has just begun. And in the hands of the incomparable Harry Turtledove, readers are treated to a masterful vision of what might have been. An enduring portrait of history, nations, and human nature in its many manifestations, Return Engagement is a monumental journey into the second half of the twentieth century.

RETURN ENGAGEMENT is powerful stuff--and among the best of Turtledove's recent works. -- BooksForABuck