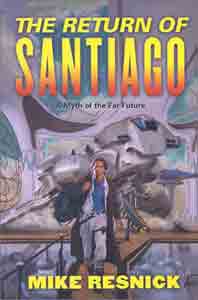 The Return of Santiago

Synopsis of The Return of Santiago

They say his father was a comet and his mother a cosmic wind, that he juggled planets as if they were feathers and wrestled with black holes just to work up an appetite. They say he never slept, that his eyes burned brighter than a nova, that his shout could level mountains. That he killed a thousand men, and saved a hundred worlds.They called him Santiago.Bandit, assassin, rebel, thief, he strode across the galactic rim, blazing a legend as rich and wild as the Inner Frontier itself. Then, at the height of his glory, he vanished, leaving behind a trail as elusive as starlight in the empty realms of space. Now, a century later, the name of Santiago is once again whispered along the Galactic Rim ...

Reviews of The Return of Santiago

Fans of Pecos Bill in Outer Space will appreciate THE RETURN OF SANTIAGO and clamor for re-release of the legendary first novel. -- Harriet Klausner, Harriet Klausner's Review Archive

His flair for writing tight, action-filled scenes is still on display. And his ingenuity at plotting is undiluted. -- Paul Di Filippo, Scifi.com

Like his original Santiago: A Myth of the Far Future, the whole thing turns out to be fun to read...if painful to think too hard about. -- Ernest Lilley, SFRevu

...in my opinion I have an early contender for the best sf Book of 2003 -- Shawn P. Madison, The Eternal Night