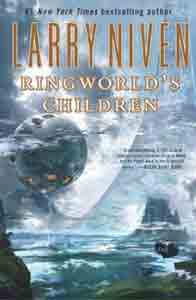 The Ringworld: a landmark engineering achievement, a flat band 3 million times the surface area of Earth, encircling a distant star. Home to trillions of inhabitants, not all of which are human, and host to amazing technological wonders, the Ringworld is unique in all of the universe.

Explorere Louis Wu, an Earth-born human who was part of the first expedition to ringworld, becomes enmeshed in interplanetary and interspecies intrigue as war, and a powerful new weapon, threaten to tear the Ringworld apart forever. Now, the future of Ringworld lies in the actions of its children: Tunesmith, the Ghould protector; Acolyte, the exiled son of Speaker-to-Animals, and Wembleth, a strange Ringworld native with a mysterious past. All must play a dangerous in order to save Ringworld's population, and the stability of Ringworld itself.

Blending awe-inspiring science with non-stop action and fun, Ringworld's Children, the fourth installment of the multiple award-winning saga, is the perfect introduction for readers new to this New York Times bestselling Series, and long-time fans of Larry Niven's Ringworld.

Larry Niven, one of the grandmasters of science fiction, has brought a classic to a new generation of readers. -- Harriet Klausner, BooksNBytes

All in all, an enjoyable romp in what is still one of the most fascinating worlds ever devised. -- Mark L. Olson, The New England Science Fiction Association, Inc.

Read Ringworld's Children for scifi with more than its share of punch and humor. -- J. A. Kaszuba Locke, Bookloons

The story is adventurous and utterly satisfying, a true ending to a Series that has become a playground for so many, and whose possibilities will never be fully tapped. -- Cindy Lynn Speer, Fantastica Daily

The characters are not really fleshed out or motivated, and I found myself uninvolved with the story. -- BooksForABuck

Niven's dialogue, as always, is crisp and functional, and his patented method of eliding action and deductive chains of logic...allowing the reader to fill in the blanks...continues to work wonders of economy. -- Paul Do Filippo, Scifi.com