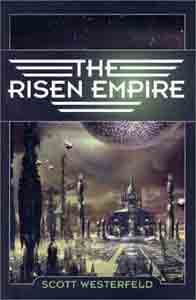 Synopsis of The Risen Empire

The undead Emperor has ruled his mighty interstellar empire of eighty human worlds for sixteen hundred years. Because he can grant a form of eternal life, creating an elite known as the Risen, his power has been absolute. He and his sister, the Child Empress, who is eternally a little girl, are worshiped as living gods. No one can touch them. Not until the Rix, machine-augmented humans who worship very different gods: AI compound minds of planetary extent. The Rix are cool, relentless fanatics, and their only goal is to propagate such AIs throughout the galaxy. They seek to end, by any means necessary, the Emperor's prolonged tyranny of one and supplant it with an eternal cybernetic dynasty of their own. They begin by taking the Child Empress hostage. Captain Laurent Zai of the Imperial Frigate Lynx is tasked with her rescue.Separated by light-years, bound by an unlikely love, Zai and pacifist senator Nara Oxham must each in their own way, face the challenge of the Rix, and they each will hold the fate of the empire in their hands.

The Risen Empire is the first great space opera of the twenty-first century.

Scott Westerfeld is a software designer, a composer of music for modern dance whose works have been performed both here and abroad, and the Author of three previous novels. He lives in New York City and Sydney, Australia.

Reviews of The Risen Empire

The entire plot is hurried, engaging in a one-step-forward, two-steps-back kind of titillation that is meant to heighten suspense but all too often leaves one feeling manipulated by serial cliffhangers instead. -- Paul Witcover, Scifi.com

Do yourself a favor and get on-board. -- Paul Giguere, SFRevu

Fans who want mind boggling action will resent the flashbacks as intrusions while those who want to understand alien worlds and ways of life will appreciate these as delightful erudition. -- Harriet Klausner, BooksNBytes

Westerfeld's world is carefully imagined, but his purpose remains, at best, vague. -- Claude Lalumi...re, Infinity Plus