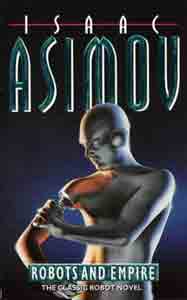 Synopsis of Robots and Empire

Long after his humiliating defeat at the hands of Earthman Elijah Baley, Keldon Amadiro embarked on a plan to destroy planet Earth. But even after his death, Baley's vision continued to guide his robot partner, R. Daneel Olivaw, who had the wisdom of a great man behind him and an indestructable will to win....

Reviews of Robots and Empire

Most of the Book kept me interested and wanting for more. However it was not without problems. -- Steven Goldsmith, Goldkeys Services

It has something of the travelogue nature of some of the later robot/Foundation Books, and it has a goodly helping of sex-but it is not memorable. -- John H. Jenkins, Jenkins... Spoiler-Laden Guide to Isaac Asimov