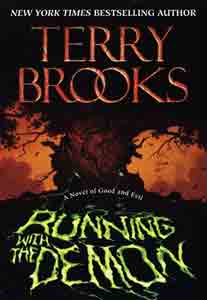 Running with the Demon

Synopsis of Running with the Demon

Twenty years ago, Terry Brooks turned fantasy fiction on its head with The Sword of Shannara, the first fantasy novel to make the mainstream bestseller lists, and the first in an unbroken string of thirteen bestselling Books. Now, in Running with the Demon, Brooks does nothing less than revitalize fantasy fiction again, inventing the complex and powerful new mythos of the Word and the Void, good versus evil still, but played out in the theater-in-the-round of the "real world" of our present.

On the hottest Fourth of July weekend in decades, two men have come to Hopewell, Illinois, site of a lengthy, bitter steel strike. One is a demon, dark servant of the Void, who will use the anger and frustration of the community to attain a terrible secret goal. The other is John Ross, a Knight of the Word, a man who, while he sleeps, lives in the hell the world will become if he fails to change its course on waking. Ross has been given the ability to see the future. But does he have the power to change it?

At stake is the soul of a fourteen-year-old girl mysteriously linked to both men. And the lives of the people of Hopewell. And the future of the country. This Fourth of July, while friends and families picnic in Sinnissippi Park and fireworks explode in celebration of freedom and independence, the fate of Humanity will be decided...

A novel that weaves together family drama, fading innocence, cataclysm, and enlightenment, Running with the Demon will forever change the way you think about the fantasy novel. As believable as it is imaginative, as hopeful as it is frightening, it is an exquisite tale to be savored long after the final page is turned. -- terrybrooks.net

Reviews of Running with the Demon

Though occasionally burdened by a blatantly preachy tone and somewhat familiar plot devices, "Running with the Demon" ultimately succeeds as a rousing adventure tinged with darkness and magic. -- William D. Gagliani, BookPage

...Terry Brooks has done a marvellous job of crafting a novel that works and, all in all, the combination of good characterization and a fine plot makes for a truly compelling read. -- Wayne MacLaurin, SF Site

A chilling blend of the mundane and magical, a far more intriguing and complex peek into Brooks' thought than we get in Shannara, plus his usual terrific characterizations. -- Heart o' Glory

...overall a disappointing effort, with the "bad" people too unrelentingly bad and the main character more an observer than a participant in the story. -- Craig Little, BookBrowser

I found that that this Book was an okay read. -- Conan Tigard, BookBrowser