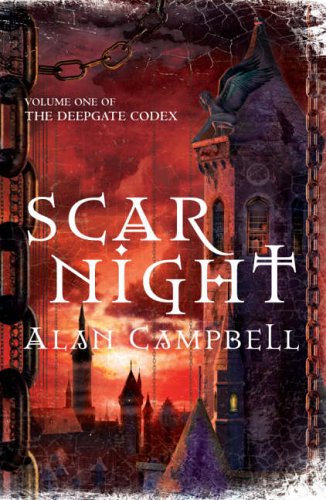 Suspended by chains over a seemingly bottomless abyss, the ancient city of Deepgate is home to a young angel, an assassin, and a psychotic murderer hungry for revenge...or redemption. But soon a shocking betrayal will unite all three in a desperate quest....

The last of his line, Dill is descended from legendary Battle-archons who once defended the city. Forbidden to fly and untrained even to wield the great sword inherited from his forebears, he has become a figurehead for a dying tradition. Now he lives a sheltered existence in one of Deepgate's crumbling temple spires under the watchful eye of the Presbyter who rules the city.

Spine assassin Rachel Hael has better things to do than oversee the Presbyter's angel. Each dark moon she must fight for her life among the city chains, hunting an immortal predator with a taste for blood.

But when a traitor brings enemies to Deepgate's doorstep, Dill and Rachel are forced into an uneasy alliance with the city's oldest and most dangerous foe. They must journey down into the uncharted chasm to save their sprawling metropolis...and themselves...from annihilation. Once they descend however, they learn that what lies below is far more sinister than what they...ve been taught to expect.

...Campbell serves up a dark, explosive fantasy that singles him out as one to watch. -- Finn Dempster, Strange Horizons

Definitely an impressive debut, a real page-turner and thus recommended to those who are happy in dark fantasy's misery. -- Hobbit, SFFWorld

...his work is interesting, accessible, and pleasingly innovative in a field that is all too repetitive at times. -- Cheryl Morgan, Emerald City

There is a flood of quality Books and stories surging out of the United Kingdom these days, but unfortunately Scar Night is not worthy to be numbered among such. -- William Lexner, I Hope I Didn't Just Give Away the Ending

...if something new in the world of fantasy piques your interest, this Book is for you. -- Drew Bittner, SFRevu