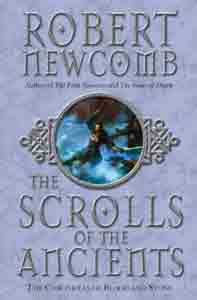 The Scrolls of the Ancients : Volume III of the Chronicles of Blood and Stone

Synopsis of The Scrolls of the Ancients : Volume III of the Chronicles of Blood and Stone

For three centuries Eutracia was a land of peace and plenty, until the return of the Coven of Sorceresses and the subsequent rise and fall of the Gates of Dawn. And now a new menace stalks the land. A race of fiendish slavers are plundering its people, taking them away across the seemingly impassable Sea of Whispers to goodness-alone-knows what horrific fate. It falls to the king in hiding, Tristan, his sister Shailiha and the wizards Wigg and Faegan to begin unraveling the mystery, but to do so the Scrolls of the Ancients must be found and their secret language deciphered. It is a quest that will take this fellowship deep into the Chambers of Retribution, across the tainted Sea of Whispers to the sacred, shrouded Isle of Sanctuary. As they unravel secrets, confront creatures beyond their imagining and discover the fate of the vanished people of Eutracia, the true identity of the enemy is revealed: a master of the Craft of Magic whose powers, ambitions and capacity for cruelty and evil threatens everything the fellowship holds dear...

Reviews of The Scrolls of the Ancients : Volume III of the Chronicles of Blood and Stone

Robert Newcomb is a great worldbuilder who will be one of tomorrow's superstars. -- Harriet Klausner, BooksNBytes