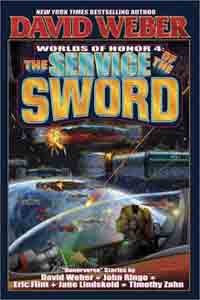 The Service of the Sword: Worlds of Honor 4

Synopsis of The Service of the Sword: Worlds of Honor 4

WELCOME AGAIN TO THE MANY WORLDS OF HONOR HARRINGTON

In this collection, Jane Lindskold gives us the story of a prince on the brink of maturity and an extraordinary young Grayson woman named Judith - a victim of Masadan brutality, who confronts insurmountable odds in a desperate effort to lead her sisters to freedom-or-death among the stars.

Timothy Zahn weighs in with a story of the heavy cruiser HMS Fearless; a brilliant young tactical officer on temporarily detached duty; Solarian con men; secret weapons that aren't quite what they seem to be; naval spies, spooks, and dirty tricks; courage and honor; and a surprising glimpse into one of Admiral Sonja Hemphill's most crucial technological innovations.

John Ringo offers his unique blend of nonstop action and deliciously skewed humor in two offerings. The Peep planet of Prague and its brutally repressive StateSec regime will never be the same again after the unscheduled, unofficial, and thoroughly catastrophic visit by a pair of Manticoran Marines with a most peculiar taste in the holiday destinations. And then there's the question of what an explosively expanding navy does with the personnel who can't quite cut the mustard.

Eric Flint tells us the story of an idealistic young StateSec officer who finds himself in the right place at the right time following the fall of Oscar Saint-Just. Young Victor Cachat could influence the loyalty of an entire sector . . . if he's only lucky enough to manage to stay alive long enough to try. And finally, David Weber gives us the tale of the first Grayson midshipwoman on her "snotty cruise" at a time when internal tensions threaten the entire future of the Manticoran Alliance and people are about to rediscover the fact that the Peeps are far from the only predators hiding in the stars.

Reviews of The Service of the Sword: Worlds of Honor 4

As a pleasant surprise, all of the stories are good with Fanatic, by Eric Flint, especially standing out. -- BooksForABuck