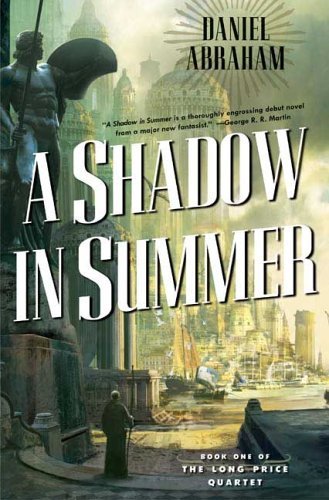 A Shadow in Summer

Synopsis of A Shadow in Summer

The powerful city-state of Saraykeht is a bastion of peace and culture, a major center of commerce and trade. Its economy depends on the power of the captive spirit, Seedless, an andat bound to the poet-sorcerer Heshai for life. Enter the Galts, a juggernaut of an empire committed to laying waste to all lands with their ferocious army. Saraykeht, though, has always been too strong for the Galts to attack, but now they see an opportunity. If they can dispose of Heshai, Seedless's bonded poet-sorcerer, Seedless will perish and the entire city will fall. With secret forces inside the city, the Galts prepare to enact their terrible plan. In the middle is Otah, a simple laborer with a complex past. Recruited to act as a bodyguard for his girlfriend's boss at a secret meeting, he inadvertently learns of the Galtish plot. Otah finds himself as the sole hope of Saraykeht, either he stops the Galts, or the whole city and everyone in it perishes forever.

Reviews of A Shadow in Summer

A Shadow in Summer has a cast of wonderful characters, all of whom are trapped into a developing plot. -- Cheryl Morgan, Emerald City

Fans of deep sagas will want to read Book one of the Long Price Quartet, A SHADOW IN SUMMER, as this will be on everyone's short list for great genre 2006 novels. -- Harriet Klausner's Review Archive

An impressive start. -- Kirkus Reviews, reprinted on Monsters and Critics