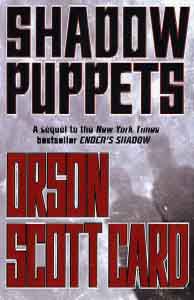 Earth and its society have been changed irrevocably in the aftermath of Ender Wiggin's victory over the Formics. The unity forced upon the warring nations by an alien enemy has shattered. Nations are rising again, seeking territory and influence, and most of all, seeking to control the skills and loyalty of the children from the Battle School.

But one person has a better idea. Peter Wiggin, Ender's older, more ruthless brother, sees that any hope for the future of Earth lies in restoring a sense of unity and purpose. And he has an irresistible call on the loyalty of Earth's young warriors. With Bean at his side, the two will reshape our future.

Here is the continuing story of Bean and Petra, and the rest of Ender's Dragon, as they take their place in the new government of Earth.

Though at times pontificating over the need of servicing one's community, the latest entry in this popular Series proves the Author still holds four aces when it comes to engaging the reader. -- Harriet Klausner, Bookbrowser

Mr. Card wraps everything up very neat and nice at the end and leaves enough still happening to make you want the next Book as soon as it is released. -- Ciara Grey, Fiction Factor

Shadow Puppets is a must buy! -- David Brown, Rebeccas Reads.com

While never overbearing, Card's steadfast Mormon faith comes through in this centuries-hence technically sophisticated world, where God has become an absence that each figure, in his or her way, tries to fill. -- Pauline Finch, Bookreporter.com

...it seems to me rather uninspired in comparison to most of Card's work. -- Aaron Hughes, Denver Science Fiction & Fantasy Book Club

...by focusing on great character development, Card delivers the story in way that is both fresh and engaging. -- Paul Giguere, SF Revu

Fans of the post-Ender Series will definitely want to read this one. -- BooksForABuck.com

So much modern fiction must bear the burden of being written post-9/11, yet Card negotiates this obligation with intelligence and insight. -- Phil Nicholls, The Alien Online