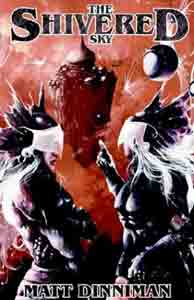 Synopsis of The Shivered Sky

Cibola, city of the angels, grand metropolis of Heaven. But now this once-fine city is overrun with demons, destroying the beautiful structures, worshipping their cruel gods, and indulging in their desire for human slaves. Such is the state of Heaven when five humans arrive on a forgotten Beacon. For Indigo, Dave, Hitomi, Rico, and Gramm, death is more dangerous than life. They mistakenly unearth the periscepters, powerful weapons of legend, sought by angels and demons alike. With such an incredible discovery, the surviving angels, hidden underground, fueled by an ancient prophecy, begin to regain the hope they thought was forever lost. But the demons have their own plans, and another war in Heaven is brewing, a great storm with the strength of a thousand choirs and the undeniable power to shiver the sky.

Reviews of The Shivered Sky

"The Shivered Sky" has to be the best Book that I have read this year. -- Tree Klotzbach, Yet Another Book Review Site

From start to finish Matt Dinniman grabs your attention and shakes you until the triumphant ending. -- Shown Rolfe, Yet Another Book Review Site

Matt Dinniman is one hell of, make that heavenly, fantastic storyteller. -- Harriet Klausner, The Best Reviews

Dinniman has shown an amazing maturity of writing especially when you consider this is his first Book. Superb! -- Lesley Mazey, The Eternal Night