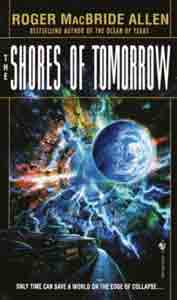 The Shores of Tomorrow

Synopsis of The Shores of Tomorrow

On the verge of extinction, only the gravest imaginable crime against humanity can save it...A bold new plan seeks to ignite a new Sunspot over Greenhouse, saving the habitat domes crucial to the survival of the Solacian people. But a secret clouds this symbol of much-needed hope: human space is contracting at a startling rate, threatening to wipe out all living worlds...including Earth. The only answer lies in the hands of the founder of the planet Solace: Oskar DeSilvo, seemingly returned from the dead to save the worlds his frauds had doomed to destruction. But as the work begins, agents of the Chronologic Patrol step in to prevent interference with the past...even at the risk of dooming humanity. Thwarted at every turn, DeSilvo and his onetime nemesis, Anton Koffield, propose one last wildly grandiose idea...one final, desperate gamble. But if the only choice lies between madness and certain catastrophe...is there any choice at all?

Reviews of The Shores of Tomorrow

Roger MacBride Allen may be new to the science fiction genre but there is no doubt that he is a rising star with the talent to rival the brightest suns of the galaxy. -- Harriet Klausner, Baryon Online