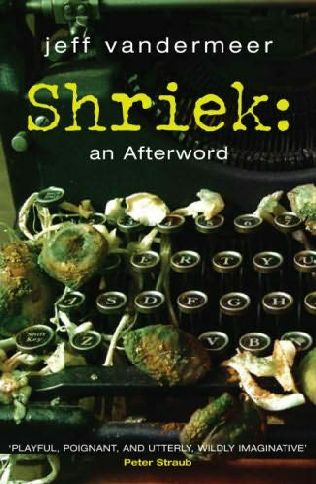 Synopsis of Shriek: An Afterword

An epic yet personal look at several decades of life, love, and death in the imaginary city of Ambergris...previously chronicled in Jeff VanderMeer's acclaimed City of Saints & Madmen...Shriek: An Afterword relates the scandalous, heartbreaking, and horrifying secret history of two squabbling siblings and their confidantes, protectors, and enemies.

Narrated with flamboyant intensity and under increasingly urgent conditions by ex-society figure Janice Shriek, this afterword presents a vivid gallery of characters and events, emphasizing the adventures of Janice's brother Duncan, a historian obsessed with a doomed love affair and a secret that may kill or transform him; a war between rival publishing houses that will change Ambergris forever; and the gray caps, a marginalized people armed with advanced fungal technologies who have been waiting underground for their chance to mold the future of the city.

Part academic treatise, part tell-all biography, after this introduction to the Family Shriek, you...ll never look at history in quite the same way again

Reviews of Shriek: An Afterword

...an unaffecting Nabokovian intellectual exercise with very little beyond its cleverness to recommend it, and a poor introduction to both the Ambergris universe and VanderMeer's otherwise exceptional body of work. -- Abigail Nussbaum, Strange Horizons

...a well-written and imaginative but flawed work of fantasy. -- Arthur Bangs, SFFWorld

...not just a great Book; it is a great Book with a very serious point to make. -- Cheryl Morgan, Emerald City

It's easy to get swept up into the story, and it's difficult not to appreciate the artistry of the work. -- Neil Walsh, SFSite

at once inspirational (I want to use words as he does, I want to find startlingly insightful ways to do character and story) and dauntingly off-putting (he has what I simply don't...). The bastard. -- Keith Brooke, Infinity Plus